History of Rugby in Gunnedah

For many years it was believed that Rugby commenced in Gunnedah in 1891, and a Gala Function was held in 1991 to celebrate the Club’s centenary. In researching the origins of Rugby in Gunnedah for his history of the Club, Don McDonagh discovered that the Club was actually founded in 1883 by Messrs Willsallen and Iredale, at a meeting held at Hurley’s Hotel, on the motion of Mr Bacon.

In an effort to remove from the game the notorious “maul in goal”, a description of which can be read in “Tom Brown’s Schooldays”, Gunnedah is credited with introducing the concept of “backs” and “forwards” to the game of Rugby. The refereeing in those days was often done by the respective Captains who “accepted the word of the other without demur” – what gentlemen they were back then!

From 1883 a local competition developed with teams from Gunnedah, Coocaboonah, Emerald Hill, Curlewis and Carroll. The dominant teams were Gunnedah and Emerald Hill. The weaker teams were given a handicap of so many points starts. In 1891, under the coaching of J.G Little, the Gunnedah team challenged Armidale and won. From 1900 onwards Gunnedah won three premierships – 1901, 1906 and 1908. The 1906 result was disputed which led to a re-organisation of the competition.

The New Zealander Joseph George “JG” Little arrived in Gunnedah in the early 1800s, and became the Patriarch of the Gunnedah Rugby Football Club. He was joined in 1891 by another New Zealander, Frank Priest, who had represented NZ at Rugby. Due, no doubt, to this strong Kiwi influence, the original playing strip featured a large silver fern on a navy blue jersey, and replicas of tis strip were worn by Gunnedah players during the 1991 “Centenary” season. It is interesting to note that the Club pre-dates the formation of both the ARU and the NZRFU.

The modern history of Gunnedah Rugby Club began in 1956, after a team had played a match against Tamworth the previous year. At a well attended meeting held at the Town Hall on February 2nd 1956, Ron Heath was elected President, with Norman Ross (Ireland and British Lions) Vice President. John McDonagh was inaugural Secretary, Don McDonagh Treasurer and Ron Heath and Norman Ross coaches. After a break of 30 years, Rugby was back in Gunnedah!

In 1979 the Gunnedah Rugby Club purchased 38.36 acres (15.52 ha) on the Wandobah Road and began construction of their own home ground. An enormous amount of voluntary work went into the preparation of the playing field, with underground automatic irrigation and a soft Kikuyu playing surface. A grant from NSW Sport and Recreation was obtained, and changing rooms and a canteen were built at the ground.

The “Two Bob’s Stand” was erected to honour two club stalwarts, Bob Andren and Bob Palmer. As time went on, the facilities were extended with the addition of a magnificent Club House and children’s playground. New aluminium goal posts were erected for the 2001 season, and a family barbecue area has been built.

Our Club is now incorporated, and we are a fully registered Club. The Club House and facilities are available for hire, and have seen some magnificent weddings, community functions and the like.

We believe we now have the best Rugby facilities outside the major metropolitan areas, and further improvements are planned. 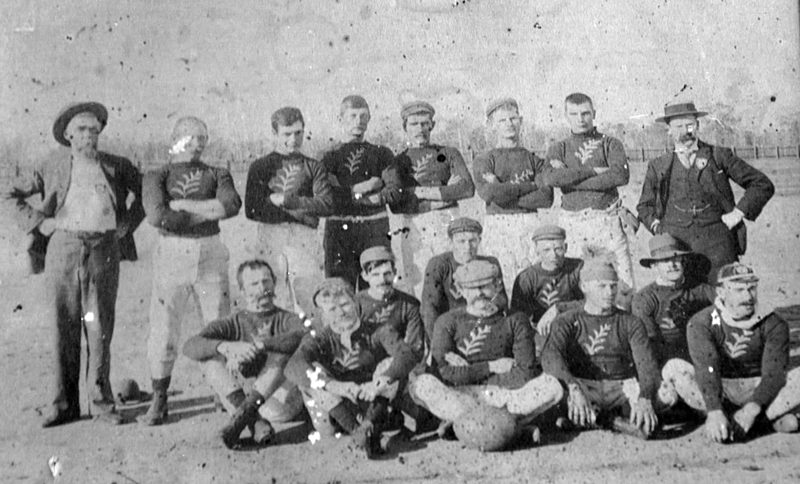 The Gunnedah team from 1891

The premiership winning team from 1908